Mashable: Web Startups and the Lying Liars that Lie About Them

This one is so funny, and oh so true. Just had to post this list of Web Startups and the Lying Liars that Lie About Them from Mashable.

10 semi-truths Mashable uses “for the sake of brevity, hyperbole or just plain laziness“.

1. “It’s the X of Y!!” Wherein X represents a hot service with $25 million in VC, and Y represents something that has no fathomable relation to X. Example: Cheese is the YouTube of foodstuffs.

4. This one may “gain traction” – A Mashable stalwart. Truth: I have no clue whether this startup will take off, but if it happens, I called it!

5. “it’s very alpha”. Truth: site is less reliable than MySpace, a fact that should defy the laws of physics.

6. “it needs more work”. Truth: if there was a state before alpha, pre-alpha, and super pre-alpha, this site would be it.

8. “a social network with XX million users” Where XX is a totally fictional number the founders made up, and we took it as fact.

9. It’s The XYZ Killer!! – Wherein XYZ represents an amazingly popular one-of-a-kind service and the thing doing the killing launched today on a server in the 13 year old founder’s bedroom.

10. “?” Ah, the question mark, the ultimate lie! Printing an unsubstantiated rumor from a stranger named Dave is bad journalism. You might be wrong. But put a question mark after it, and you called it either way! Suggestions: Digg Acquired by Donald Trump?, Metacafe Worth $1 Trillion?, Queen of England Reads Mashable Daily? 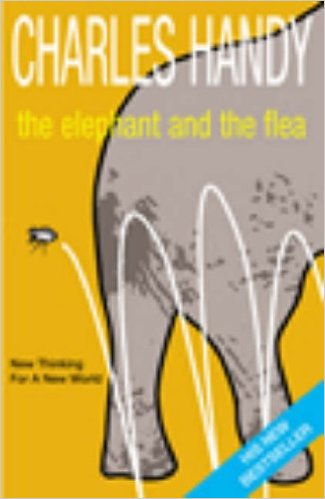 Reading: The Elephant and the Flea

The Elephant and the Flea (Charles Handy)
The Elephant and the Flea is both a poignant personal memoir and a deep reflection on the past and future of world capitalism, with all its possibilities and pitfalls. In a tone that is at once learned, genial, witty, and wise, Handy takes us on his life’s journey, looking back to his childhood and education and how they prepared (or, rather, did not prepare) him for a career in business, the changing nature of organizational life within the context of the old economy and the new, the great variety of capitalism around the world, and through it all, his struggle to find meaning and fulfillment in work. Handy uses the quirky, powerful metaphor of the elephant and the flea to describe vividly and critique the great shift from the prevalence of behemoth, slow-moving, bureaucratic organizations that provided a lifetime of security and not much freedom or room for creativity, to a world in which we are much more independent and flea-like, flitting from job to job, latching onto elephants when we need to, but mostly flying solo and without a net.

ComputerWorld’s list of the 21 Biggest Technology Flops where they “fondly recall 21 overpromoted products and technologies that utterly failed to live up to their hype“.

This one ties in perfectly to my previous post. Let it be a warning…

Yes … Second Life … The NextBigThing. Everyone’s been writing about it frantically. Except for me. Because I’m not a believer. I have seen hypes come and go, I have seen companies rise to fame and disappear into oblivion. And I am not convinced by SL. Sure, it has the majority of they hype now, but there are others out there, working diligently to take its place, biding their time.

People tend to forget that online communities have been around in one form or another over the years. BBS, IRC chat, ASL pages, online communities … SL is just another 3D virtual world that builds on the desire of humans to form communities and interact with one another. And there are others out there. Some have even been along longer, like ActiveWorlds. Look also at There, whose engine is being used by MTV to create their own virtual world. Even the owners of gaming consoles will now get their own virtual world, with Sony’s Home coming to the PlayStation.

As for me, I simply don’t go into SL because I can’t even get all the things done in my First Life, including the online part of it like IM, games, keeping up with all the mails, RSS feeds, blogging and more. No reason for me to spend even more time in my Second Life. Personally, if I had some time I’d play World Of Warcraft because I’m more into adventures than just building myself another “second” life.

For those interested in more, have a read at Björn Joos‘ vision here (sorry, it’s in Dutch only).

And if you do want to hang out in virtual worlds, take your pick from the list on Virtual World Review.

All this made me think of The Matrix again, the biggest virtual world of them all… a red pill, anyone?