Good advice: “It doesn’t matter what industry you’re in. People have blind spots about where they’re weak,” says Scott Erker, a senior vice president at DDI, which conducted the survey in September.

The previous post on the Asoh defense led me to another real gem, the Abilene paradox.

Where I work, they have something called “disagree and commit“. It’s a good principle if it works, and when there is ample time to discuss, as this post explains. It tends to get a bit scary when the discussion bit is omitted (by fear of displeasing management or whatever the reason may be), and people end up with the Abilene paradox. This is a paradox in which a group of people collectively decide on a course of action that is counter to the preferences of any of the individuals in the group. It involves a common breakdown of group communication in which each member mistakenly believes that their own preferences are counter to the group’s and do not raise objections. Scary, isn’t it? The paradox is usually inllustrated by the below story:

“On a hot afternoon visiting in Coleman, Texas, the family is comfortably playing dominoes on a porch, until the father-in-law suggests that they take a trip to Abilene [53 miles north] for dinner. The wife says, “Sounds like a great idea.” The husband, despite having reservations because the drive is long and hot, thinks that his preferences must be out-of-step with the group and says, “Sounds good to me. I just hope your mother wants to go.” The mother-in-law then says, “Of course I want to go. I haven’t been to Abilene in a long time.”

The drive is hot, dusty, and long. When they arrive at the cafeteria, the food is as bad. They arrive back home four hours later, exhausted.

One of them dishonestly says, “It was a great trip, wasn’t it.” The mother-in-law says that, actually, she would rather have stayed home, but went along since the other three were so enthusiastic. The husband says, “I wasn’t delighted to be doing what we were doing. I only went to satisfy the rest of you.” The wife says, “I just went along to keep you happy. I would have had to be crazy to want to go out in the heat like that.” The father-in-law then says that he only suggested it because he thought the others might be bored.

The group sits back, perplexed that they together decided to take a trip which none of them wanted. They each would have preferred to sit comfortably, but did not admit to it when they still had time to enjoy the afternoon.”

Imagine telling your boss you’re off for a family emergency.
Imagine going to a halloween party instead.
Imagine posting a picture of you at the party on facebook.
Imagine your boss also being on facebook.
you can imagine the result here.

Irritable when returning home from work? Drained of emotion? Well, then you could be suffering from … bore-out. In this article two researchers describe the phenomenon and how people end up there.

Oh, and the manager is usally to blame. It goes something like this: boss refuses to delegate work, underlings end up with more mind-numbing tasks, stop asking forresponsability after a while, start to just let the good times roll, and do low-intensity tasks while surfing the internet or doing other fun stuff with their new free time at the office. Eventually though, self-esteem goes dow, the boss ends up with a burn-out and some of his underlings end up with a bore-out. No happy end here.

Be sure to ask yourself the 10 questions at the bottom of the article to determine if you suffer from a bore-out. And if you do, it seems you have only 2 options: come clean with the boss or get the hell out of there.

There’s another article here, also at the Times that continues on the same topic. Statisitics suggest that 15 percent are under-challenged, do extremely little and suffer from bore-out. No problem, that means there are still 85 percent top performers there. Well… not really. According to Gallup, “three in five of us are “not engaged” – dutifully turning up to our place of work but lacking any energy or enthusiasm.”

Found in The Times.

Intel recently published “Infomania”, a paper on e-mail overload, over at firstmonday . Although the topic has been reviewed on the internet numerous times, this paper talks about some real life experiences from within Intel.

For example, did you know that a typical Intel knowledge worker receives 50–100 work–related e–mail messages each day. Not much you say? True, but then take into account that these mails often continue to accumulate, adding to the workload: messages need to be read and disposed of, i.e. even more uninvited work generated by those messages, reducing time that people can devote to their primary work.

More numbers: “on average, knowledge workers can expect three minutes of uninterrupted work on any task before being interrupted. Sources of interruption include e–mail, instant messages, phone calls, text messages, co–workers, and other distractions. The majority of these distractions are attended to immediately.” Immediately! It is estimated that this fragmentation of the workload adds up to a cumulative time loss that can run as high as 25% of your work day. As a result “The combination of these phenomena has led to a state where employees are so stressed and overwhelmed that their ability to function is seriously impaired, and their quality of life and job satisfaction plummet.” Sounds familiar to anyone?

“While e–mail is a legitimate – and vital – part of today’s workplace, much of it simply isn’t. Intel employees spend an average of some three hours per day processing e–mail. About 30 percent of messages (one million per day) are unnecessary. The unnecessary fraction consumes about 20 minutes every day. That’s fully paid time not devoted to useful work, spent creating, forwarding, opening, reading, and processing messages whose real value is less than the time consumed.”

My favourite quote in the article: “Today, the only time we can think is when the flight attendant orders us to close our notebooks prior to landing.”

P.S. The ADT in the title stands for “Attention Deficit Trait“, a term coined by professor Edward Hallowell, who asserts that the cognitive impact of Infomania causes people to work well below their full potential.

Found through ClearContext, who in turn found it at the IT@Intel blog … or how the world turns. 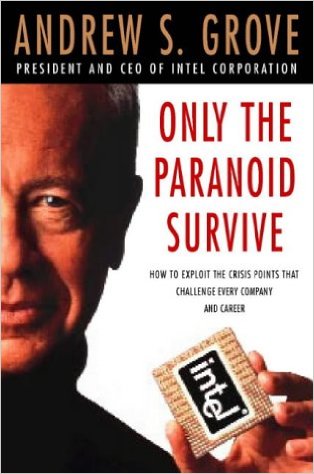 Reading: Only the Paranoid Survive

Only the Paranoid Survive (Andrew Grove)

Ever heard of ‘strategic inflection points’? If not, catch up and read this book. It’s about recognizing, overcoming and even profiting from the inevitable groundshifts in commercial life that, by changing the fundamentals of the business environment, shake established enterprises to the core and raise newcomers to power and wealth.

Andy Grove wrote two masterpieces, this one (Only the Paranoid survive) and High Output Management. Andy is the person that turned Intel around from a memory company to the biggest chip company in the world. You should pay attention to that, and read his work.